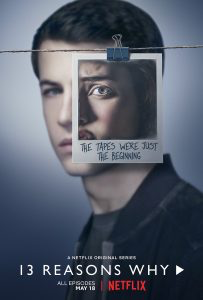 Well, finally there’s a follow up to the world famous series Thirteen Reasons Why. A series about mental health disorders and the cruel world of high school.

Unfortunately the follow up wasn’t near as good as the first season. Me and Wilma watched the show last night, the day it came out. The episodes are long, which is a good thing. I believe that they have an average of an hour or so per episode so we didn’t get to watch more than two before we nearly fell asleep in the sofa.

I don’t know why they aren’t as good. Maybe because the first one was SOOOO GOOOD that you had to high of hopes, maybe it’s because the last season was based on the book Thirteen reasons why and now the jus made the rest of the story up themselves and that’s why it doesn’t have the same quality. I don’t know. All I know is that I’m disappointed. I don’t even fell the need to continue watching the rest of the episodes. Sad, but true.

I don’t even know the reason for me to tell you this, I think I just wanted to write it. So here you go 😉